A new plan for Döbbrick 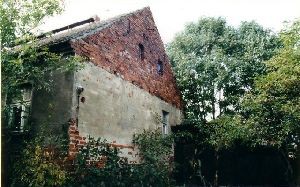 At the end of the ninetees of the last century the congregation of Döbbrick had to decide what could be done with the buildings. Because of only 30 parishioners there was the thougt about giving up the whole property. It was clear, that this little congregation would not be able to pay the expected costs of restoring the buildings. On the other hand they worked hard on plans and on searching for partners for a new utilisation. 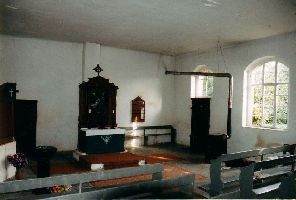 In partnership with the missionary office of the SELK (Lutherische Kirchenmission with seat in Bleckmar / Lower Saxony) they decided to begin a new missionary work in Döbbrick with the aim to offer people the Christian faith as a basis of life.

Bearer of this work is the missionary office of the SELK, which has rent the buildings of the congregation and sent missionary Holger Thomas to Döbbrick.

In September 2000 the construction work started at the total dilapidated parsonage. Regularly hard work of the parishioners, friends of the congregation and fellows from other congregations of the SELK let the construction work quickly go ahead. The building preserved in it´s foundation walls got a new basement and a new top floor. Already at the end of March 2001 missionary Holger Thomas and his family could move into the parsonage.

The second step: Restoring the church.

For 2002 the congregation got the buildings funds, collected in the SELK. This meant, that during the whole year 2002 all congregations of the SELK collected for the construction work in Döbbrick.

On Jan. 27th this collecting was started with a festive Service in the old dilapidated Döbbrick church.

Because of the presence of bishop Dr. Diethard Roth, who had the sermon, the sympathy of the whole SELK to this project was made clear. Finally in March 2002 the planning permission was given. And again there was hard working.

A lot of people helped. Regularly members and friends of the congregation came on Saturdays to do the construction work.

What was amazing: People from the village joined the congregation in restoring the church. It really became a „church of cooperation“. More than 4.000 hours of work were done at the building site. Companies of other SELK congregations did complete parts of the work free of charge.

In the years 2001 and 2002 in Döbbrick for two weeks there was realized an international youth camp with participants from Poland, the U.S.A. and Germany. The program included bible studies as well as working at the building site.

„Practical work for the Lord of the church, Jesus Christ“, this was the idea the youth understood and practiced. 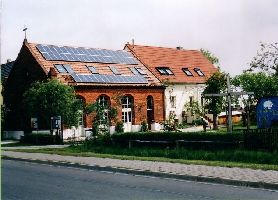 Beyond this, there were two other groups from the american sister-church, the LCMS, mainly seniors, who dedicated their manpower and their know-how in restoring the buildings. All this made possible, to get the church ready up to August 2002.

The church shall be used for worshipping as well as a social centre, as a place for religious questions and vital issues.

The last part of the construction work was to build up the top floor. Rooms for guests and sanitary facilities grew up.

Now the top floor offers room for groups up to 15 persons, who can spend time for a camp here. Also singles can use the rooms for spending vacation in this area.

From the bottom of our hearts we are grateful to God that he let us to this point and gave us the power to realize this project. And we are glad, that HE protected us from accidents and disasters during the whole tim of the construction work. 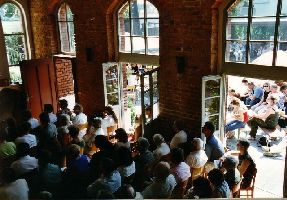 While restoring the church the character of the old building was conserved. The plaster was taken off the sidewalls. So you can see the bricks, which were not intended to be seen, with all their flaws and inexactness. These bricks symbolize the biblical message that the Lord builds his church with inexact and sinful human beings.

The windows of the southern side were extended so that they are now big doors. The building gives the impression of being frankly and inviting.

The fixtures (altar , pulpit, baptismal font, cross and candleabrums) were mead of the old roof-beams without major changes or refinement of the outer structure. They show the traces of working of the old times and the damages and clefts which developed in the meantime. With that here has been symbolized a theological message for us again: „God forms human beings – just the way they are: inexact and imperfekt – and he hires them for his service“.

We consciously want to make a contribution to the preservation of God´s creation while producing electric current without using not renewable energies.

The construction was not financed by construction donations but by the „Deutsche Bundesstiftung Umwelt“ and by a circle of friends and parishioners who made the question of the careful dealing with God´s good creation as a topic.