In the early 1840s Christians in Cottbus and in surrounding villages as far away as Burg in the Spree Forest were under the leadership of Pastor Jan Kilian from Weigersdorf in Upper Lusatia. They had established themselves as a congregation of the Evangelical Lutheran (Old Lutheran) Church because they opposed the union of the Lutheran and Reformed churches that the king had ordered.

Their first place of worship was an attic in the home of the Tschentke family in Brunswig. This was in 1844.

During the years that followed farmers from the neighboring villages of Sielow and Döbbrick joined the congregation. Soon the attic became too small to accommodate all of them.

In 1849 they were allowed the use of a cemetery chapel in Ostrow. Pastor Gumlich, also from Weigersdorf, served the Old Lutherans there.

In June of 1857 permission to use the chapel was revoked.

The first buildings in Döbbrick

The farmers from Sielow and Döbbrick who belonged to the congregation decided to buy a vacant pub with an adjoining dance hall and house that was up for auction in Doebbrick. They enlarged the dance hall and converted it into a church. These believers then received the formal status of a congregation of the Old Lutheran Church. Albert Ebert was sent to Döbbrick in the autumn of 1858 to be their pastor. He also served the congregation in Cottbus.

The Cottbus congregation still seeks its own church.

The Schulz family in Ostrow then made its house available to the Cottbus parishioners. And so it was that a dining room in a private home became the third place where the Cottbus Old Lutherans met for worship as they continued their search for their own church home.

Here, too, the congregation grew until the space was too small.

In October 1870 the fourth place of worship was dedicated. The address was Wallstraße 86 (now Ebertstraße).

In his sermon during the dedication ceremony, Pastor Fengler, who had served the congregation since 1867, described the recurring situation of the Cottbus parish.

As the day of their eviction drew closer, the prospect of finding a new location diminished. The congregation simply could not afford to pay much for rent because its parishioners were few and quite poor. For a time they dared to dream that they might be offered the use of one of the cemetery chapels in the suburbs. But even that hope they had to relinquish. Then, in a moment of spiritual weakness, they considered giving up their status as an independent congregation in favor of joining another parish. No one was present there who encouraged them to believe otherwise. (Sermon at the dedication of the temporary worship location, 1870, p.1).

Building The Church of the Holy Cross in Cottbus 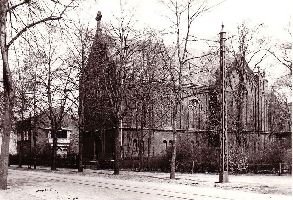 In 1878 the congregation decided to build its own church in Cottbus. Strictly speaking, the congregation was too small and too poor to build a church. But a donation of about 2,000 marks (today about 45,000 euros) had been offered with the condition that construction had to begin in the same year. This donation boosted the courage of the Old Lutherans. It also was the basis for financing a church that would equal the other local churches in its size and appointments.

All members of the congregation were expected to donate to the building project. Pastor Fengler also solicited funds from congregations in Prussia, the United States, Australia, Russia, Scandinavia, the Netherlands, and Austria.

An appeal published in the German-American newspaper „Der Pilger durch Welt und Kirche“ is evidence of his efforts. A copy of the newspaper, dated April 6, 1878, is preserved in the church’s files.

On May 10, 1878, the cornerstone was laid. On September 13 of the same year, the congregation received the status of an independent congregation. Construction lasted one and one-half years. At the close of 1879 the new church as consecrated under the name „Kreuzkirche“ (Church of the Holy Cross).

The new congregational office in the Karlstraße in Cottbus

Most parishioners from Sielow now worshipped in Cottbus and belonged to the new congregation. Later, the parish office was moved from Döbbrick to Cottbus.

Early in the 1880s the Cottbus parish built a small print shop where Gotthold, the Sunday newspaper, was produced. Pastor Fengler was the newspaper’s editor. Tracts and booklets were printed and distributed there, also.

In the 1890s a new congregation was founded in Senftenberg. It was assigned to be under the auspices of the Cottbus parish.

To mark the 25th anniversary of the Kreuzkirche in 1904, the interior of the church was redesigned. A central aisle was added that divided the continuous rows of pews into two equal sections.

The second-hand organ was now unplayable and had to be replaced. A new organ was built by the organ builder Heinrich Schlag from Schweidnitz in Silesia.

Beginning in 1935 Pastor Seefeldt served the Cottbus parish. In 1941 he was called to military service. For four years Mrs. Seefeldt held the congregation together by conducting Bible studies and Sunday School.

In February 1945 she left the parsonage and gave the keys to a neighbour. Soon afterward the Gestapo confiscated the parsonage and set up its headquarters there. They hung a picture of Adolf Hitler in the living quarters and installed a secret radio transmitter in the church. After the collapse of the Nazi regime, this series of circumstances nearly led to the church’s destruction because the Communist municipal authorities discovered the picture and the transmitter. Their immediate reaction was to threaten to blow up the church. However, one of the elders of the congregation was able to clear up the facts so that the disaster could be prevented. Nevertheless, one and one-years passed before the church property was returned to the congregation.

The time after World War II

But the church could not be used as it was. The original slate roof had been severely damaged by the ravages of war and plundering. Two grenades had exploded against the southern wall; a stone arch in the nave had been destroyed; and all of the windows had been blown out. Only the organ, the pews, and the altar were intact. Parishioners and neighbours very wisely had put the sacred vessels for Holy Communion and baptism, the altar carpet, the altar piece, the chancel Bible, and other valuables into safekeeping. 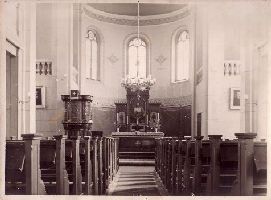 The repair of the Kreuzkirche progressed very slowly because building materials and stained glass were so hard to come by. The church was ready to be used again on May 15, 1949 (Cantata Sunday). The 70th anniversary of church’s consecration was celebrated on this occasion, also.

The church had to be reroofed in 1967 because moisture was leaking in and causing considerable damage. The local authorities did what they could to obstruct the work, which then proceeded slowly.

On the occasion of the church’s 100th anniversary in 1979, a complete renovation was realized. The altar, the pulpit, and the baptismal font were replaced. Elly-Viola Nahrmacher, an artist from Greiz, was commissioned to create a new altar piece.

Pastor Johannes Zellmer, who later became church president of the Old Lutheran Church, served the congregation from 1955 to 1992. Here he describes the last hectic phase of the construction work. It was very difficult to get scaffolding. So the carpenter who was to build the stairs had to be hired on very short notice. He had twenty-four hours in which to build new staircases and needed to complete the work by 6:00 a.m. on the Saturday before the dedication. The church and its ground still looked like a disaster on that day. But by Saturday evening everything was presentable for the dedication.